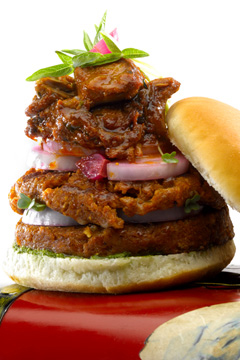 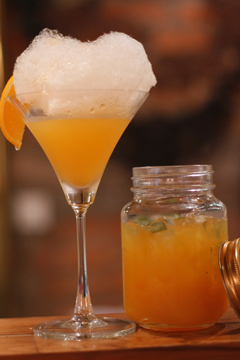 BENGALURU: When in Bengaluru where pubs and clubs close at midnight… I discovered one that rocked till 2 a.m on Monday night!! Yes I am talking about Farzi Cafe in UB City Mall where food and cocktails are created and presented as art. Conceived by Zoravar Kalra, Farzi—which translates as "illusion"—is where chefs and mixologists demonstrate their skill with a palette of dishes and cocktails that don't taste the way you'd expect it to and instead serve layered textures that take you beyond familiar sensation!

Walking in it was easy to see what makes Farzi rock: the interiors has a modern hi-energy feel though there is emphasis on comfort—with trippy house tracks that evening though there is a podium for live music. There's an island bar across the length of the room dividing it in two. the inner section is lit with chandeliers fitted with candle-shaped lights while the outer half has chic floor lamps. Now let's get to cocktails and snacks my friend and I relished! Perusing the cocktail menu, we decided to go with vodka-based cocktail 'Chai Pani' — served in chai mugs from a tea pot!! It was potent and delicious—laced with cinnamon smoke!! The culinary trail began with 'Delhi Belly Tikka' i.e. in other words, melt-in-the-mouth pork belly tikka! Right from the first bite, we were in carnivore heaven!! The pork belly soaked in anardana chutney was tender, succulent and melted like hot butter! Sinfully sumptuous!! Up next was 'Chicken Tikka Masala' with naan—delivered in a telephone booth prop!! Followed by 'The Galouti Burger' — two sliders of rich, tender galouti kebabs stuffed in soft buns and served in a red treasure chest! Stuffed to the brim, we had no room for dessert but our appetite was seduced when we saw 'ParleG Cheesecake' being served on the adjacent table. Made with cookie dough and milk custard essence, topped with Cadbury gems—it's a brilliant case of culinary art; in the server's words, 'made using reverse spherification and liquid nitrogen proficiency'.

The night was still young and we ordered a few rounds of 'Chai Pani' in the alfresco space and wished there was a dance floor — the music was that good! Walking out of Farzi Cafe at 2 a,m, after paying the bill which came nestled in a typewriter, the thought I left with was that though I've dined at several bistros, this was a landmark for molecular gastronomy. That aside, I respect Zoravar Kalra's the pains he has taken to create a playful 'farzi' ambience underlined with a stellar vision. ''I want the youth to relish Indian cuisine so I created a hi-energy ambience that appeals to their sensibilities and our chefs use molecular gastronomy to serve staple Indian food—with a modernist spin'' he had revealed at the launch of the Gurgaon outlet a few years back. no wonder it’s rocking—and how!! Cheers!