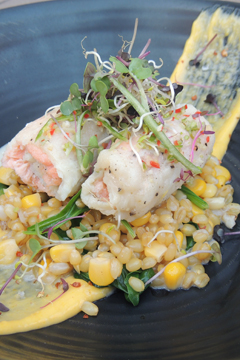 Amour has always been my restaurant of choice at HKV so when proprietor Randeep Bajaj mentioned he had opened Amour Bistro in Malcha Marg I had to check out the European bistro with picture windows overlooking lush greenery. Before I go further I must state, "genuino" is Italian word for genuine and you get the real deal when it comes to Italian cuisine here… which is what draws me back here time and again.

When we entered last week to review the new menu we were surprised by the large number of locals and tourists who filled the bistro on a week night. As we took our seat we took in the rustic-chic ambience of wooden slabs and wrought iron lamp shades. Occupying pride of place was a furnace where pizzas were being prepped. Perusing the menu we chose to begin with "Salad of Citrus-cured Salmon" and "Salad of Organic Cucumber Carpaccio" accompanied by a flute of Merlot. My seafood salad released a bouquet of flavour and texture, blended with Balsamic-and-watermelon gel and vinaigrette. It was zesty, fresh and paved the way for entrées. The carpaccio with Tabasco-spiked raspberry and mint jelly with a hint of feta foam is a delicious option for vegetarians or weight-watchers!!

For entrées my friend chose "Popped Amaranth Roast Halloumi Steak" while I opted for "Rosemary Smoked Duck Breast". Honestly I don't know how to compare the duck served with prune tortellini and parmesa salad to others I've had but I believe it is what most people would expect from a fine bistro and wouldn't mind paying for. This was one of those classic dishes that define a good meal since there's so much effort involved in making it and the portion was more than adequate!! My friend mentioned her steak with butternut mud had an old-world charm: wholesome and flavourful. We ended the luncheon on an unusual sweet note: chocolate martini!! The last thought as we left the bistro was that the chefs take pride in the food preparation and it's evident when one tastes the authentic Italian cuisine that's "amore." Buon appetito!